I’m not an IT guy, but i’m trying to using IPFS for my master’s degree.

I pinned a file, verified by the command pin ls, but the file isn’t available online (https://ipfs.io/ipfs/QmbRB73QmabdXJ1XcELfLPsyi2w6DiBRg1nvvtwXCv7Jh8)

Also, the daemon is running properly.

Anyone? I appreciate the attention

probably 1 of the following:

To better help debugging you’ll probably want to provide the version of IPFS you are using, and if you have altered any of the default configurations what you changed

thank you for the quick response!

Try using v0.4.19 which was just released. It should have better defaults for dealing with NATs (like you’re probably behind if you’re using a home internet connection).

Which OS are you using?

That’s the command for cmd.exe, but you got the information I was looking for. The fact that your peer isn’t even hitting the default low water mark of 600 peers suggests to me that there are some connectivity issues to your node.

One thing you could try is open port 4001 and forward it to your computer manually, rather than trying to rely on UPnP.

I don’t think that is the case…, yesterday were 750 peers, and had the same issue.

Could you do some verification for me, please?

Try ipfs get QmbRB73QmabdXJ1XcELfLPsyi2w6DiBRg1nvvtwXCv7Jh8. If it works, could you try to pin it, to see if it appears in the gateway?

I will be very grateful!

Try ipfs get QmbRB73QmabdXJ1XcELfLPsyi2w6DiBRg1nvvtwXCv7Jh8. If it works, could you try to pin it, to see if it appears in the gateway?

Yeah, that resolves for me. I just retrieved it through my local node’s gateway (no pin, but it’s still cached) and I can also see it through the cloudflare-ipfs.com and ipfs.infura.io gateways.

It seems like the ipfs.io gateway is maybe just having some issues.

My mistake for not noticing the relevant hash in the original post and not trying this earlier.

the file mysteriously became available for me too …

I’ve tried a bunch of other tests, and it is really an issue in my node with public gateways. I found this similar topic, but i don’t know how to apply the solution: Help accessing files from public gateway

Could you help me out configuring my router to open port correctly?

That’s how it stands right now: 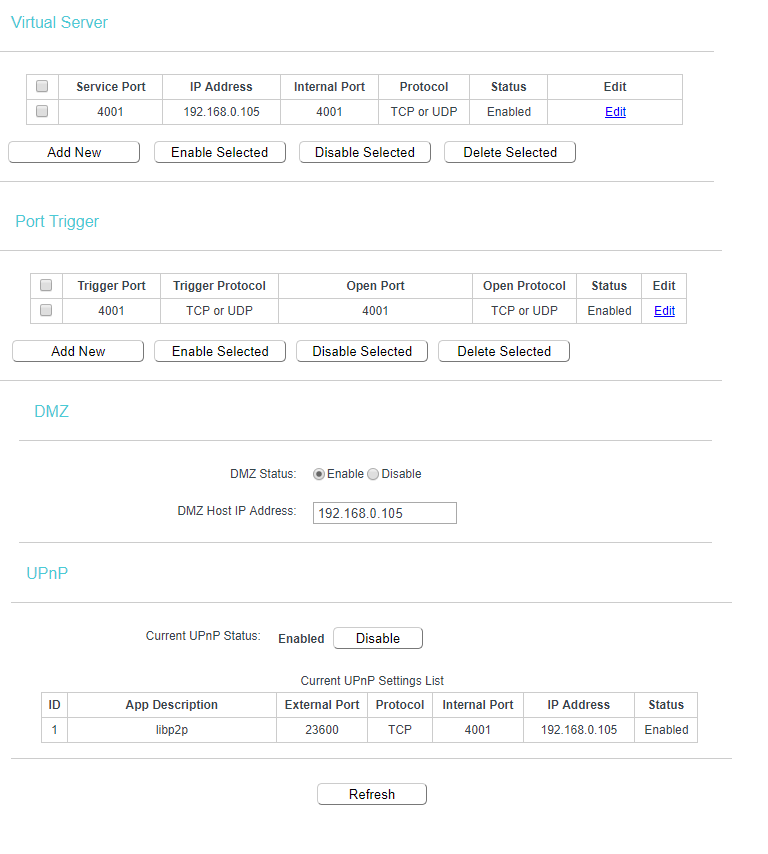 I appreciate the attention!

What router are you using?

That’s how it stands right now:

Yeah, that looks right (I wasn’t previously familiar with port forwarding being referred to as a “virtual server”).

What are the other tests you’ve done that have confirmed this is an issue specific to your node and not something specific to the ipfs.io gateway? It wouldn’t surprise me if some of the more popular public gateways are overloaded.

The fact that my node could retrieve the file from yours would suggest it’s not something specific to your node.

I did it, man! the modem in bridge mode had to have the same port configs, but pointing to the router address. Thank you for the patience! It isn’t fast, but works.

Also, about the tests:

1- I couldn’t open even in other public gateways as cloudflare or infura.

2- When I asked you to try the file, you probably pinned it, and I could open it in the public gateway, so I asked other to pin another file that I coudn’t open. When he pinned it, I could see it as well.

Know a have a bridge mode modem pointing the ports to the router, and the router poiting to my desktop. I realized that que number of peers increased too. Before it had about 250~400, and now ~740.

Also, I want to ask you: there is a precise command to see who is pinning a file? I saw in a topic that dht findprovs would to it, but with some tests, I realized that is more like a footprint of who interacted with the file.

the modem in bridge mode had to have the same port configs, but pointing to the router address.

Thanks for sharing your solution. I totally forgot about the modem/gateway device as a potential source of issues for some home connections.

Also, I want to ask you: there is a precise command to see who is pinning a file? I saw in a topic that dht findprovs would to it, but with some tests, I realized that is more like a footprint of who interacted with the file.

These are nodes that have said they can provide the content for a given hash, but the list isn’t limited to nodes that are pinning a hash. I don’t think there’s any way for a node that says it’s pinning a hash to actually prove it has the content locally – this is more inline with some of the challenges that filecoin is trying to solve.